The national media brand, a leading Ukrainian media, the ICTV channel has had a beneficial relationship with COSMONOVA|NET since 2010, and recently referred to the company with the task of modernizing and upgrading the studio involving the development and replacement of the analog console voting system for the audience of the Svoboda Slova (Freedom of Speech) show.

The main task was the development of an interactive system for the in-studio audience and experts, with the ability of dividing the audience according to certain principles depending on opinions, with options for voting and real time determination of the level of support for the topic, and the ability to pose a question to the editors directly from the tablet for its discussion on the air to replace the previous analog console version.

Before the implementation of these innovations, a group comprised of experts from various departments used various software - Excel, various graphic editors, broadcast systems, etc. - to provide the above mentioned capabilities, which in turn required much more time and human resources to produce a successful broadcast. 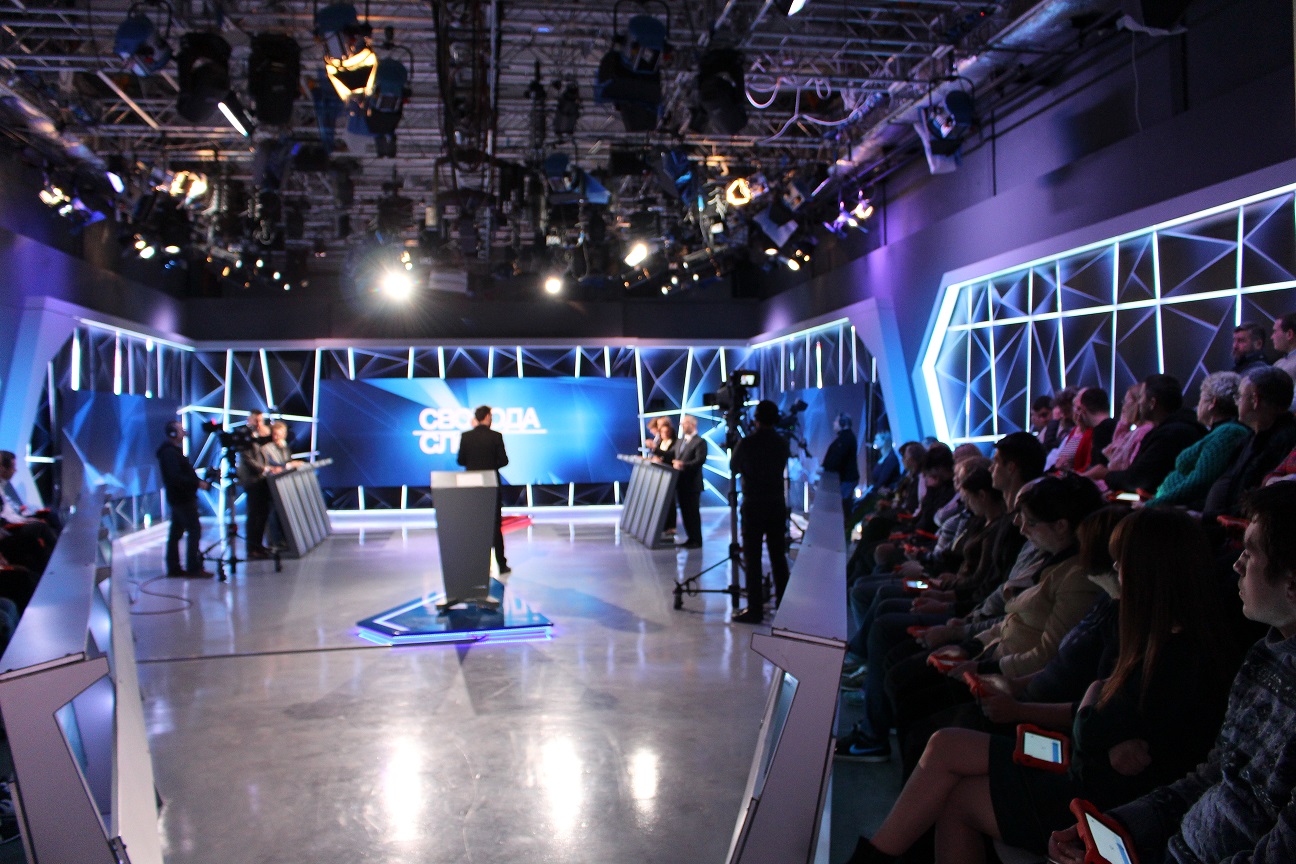 A unified system has been created and set up with profiles of the required employees with a personal set of rights added to it. The program’s audience and guest experts are also added to the system with individual parameters, thus when they come back to the studio it is much easier to have a desired sample and transmit information about the person on the screen. All the data have been organized into an intelligent analytical system for centralized statistics management.

For example, when creating a program on a specific subject, special filters help the channel’s editors find a corresponding field expert – in finance, metallurgy, architecture, etc. with the required qualification. The same system is provided for comfortable work with the studio map and the audience who may visit the talk show again. Every participant of Freedom of Speech can ask editors or experts a question live.

The implementation of the project’s technical part consists of several key parts, hardware, and the development and implementation of specialized software created by COSMONOVA|NET developers for ICTV’s individual tasks.

Hardware: a significant upgrade of the studio has been conducted with limited analog voting consoles replaced by modern tablets connected into a single local network. A virtualization platform was prepared and built on the basis of a set of servers installed and configured by highly qualified professionals of the company. The work of the entire Freedom of Speech program and other projects of the ICTV channel is now based on the cloud platform. 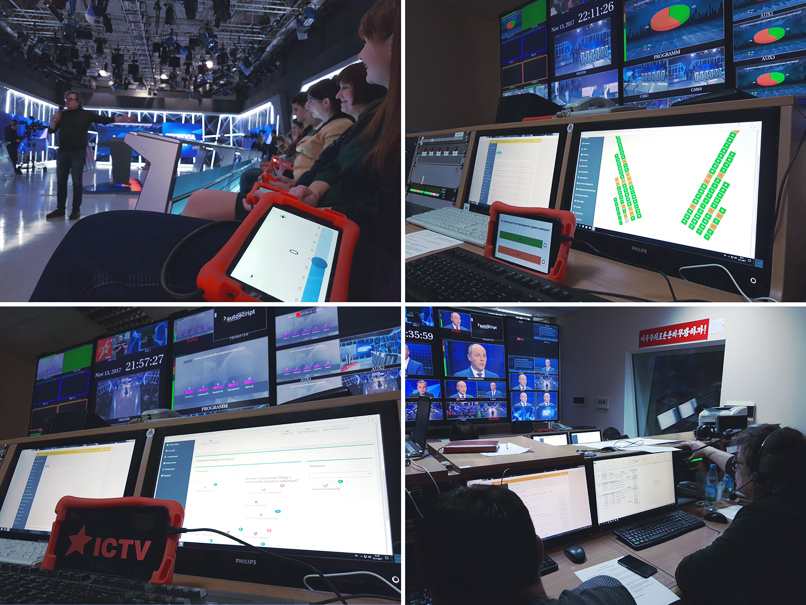 Automated Management System of the Freedom of Speech Program

The development by COSMONOVA|NET for the talk show includes:

Provided visualization of the in-studio audience support chart  - during a speech of a specific program guest, the audience members switch the sliders on the tablet depending on their reaction to either positive or negative + / -, which is then calculated and illustrated in the average curve on the main screen.

A rational titling system that helps the director instantly react to a new conversation participant, displaying his/her personal data on the screen, as well as display geolocation details during live broadcasts.

A feature that records certain signature quotes in real time during the broadcast, cuts them automatically and overlays the TV channel logo before publishing the video segment as a separate Internet video.

Improved system of final titling, at the end of the program, which allows you to abandon the use of additional individual files from video editors when replacing or urgently adjusting titles – it can now be done real time.

A new system that is able to create live broadcasts on YouTube in one click, starting and stopping the broadcast at the right time.

An implemented system of uniting the audience during a discussion, since the colors initially assigned to two different sides of the audience, divided at the beginning of the discussion according to their interests may, at a certain moment, converge on the screen chart. This allows us to determine the level of the speaker expressing his/her own opinion, and how much he managed to unite the studio audience – an event that is most welcome.

In the course of working on the Freedom of Speech project, COSMONOVA|NET has employed its many years of experience in TV and video processing, as well as the developments in the field of solutions for the TV industry: Playout, monitoring, transcoding and video editing.

Today, thanks to technical solutions successfully implemented by leading developers of COSMONOVA|NET, ICTV editors can easily add new options to the existing system.

IMPORTANT NOTE: ICTV's capital costs were divided into several parts, since the COSMONOVA|NET data center capabilities were used for the project’s implementation and operation! This project did not involve any implementors on paid platform - the software was created in an individual case! 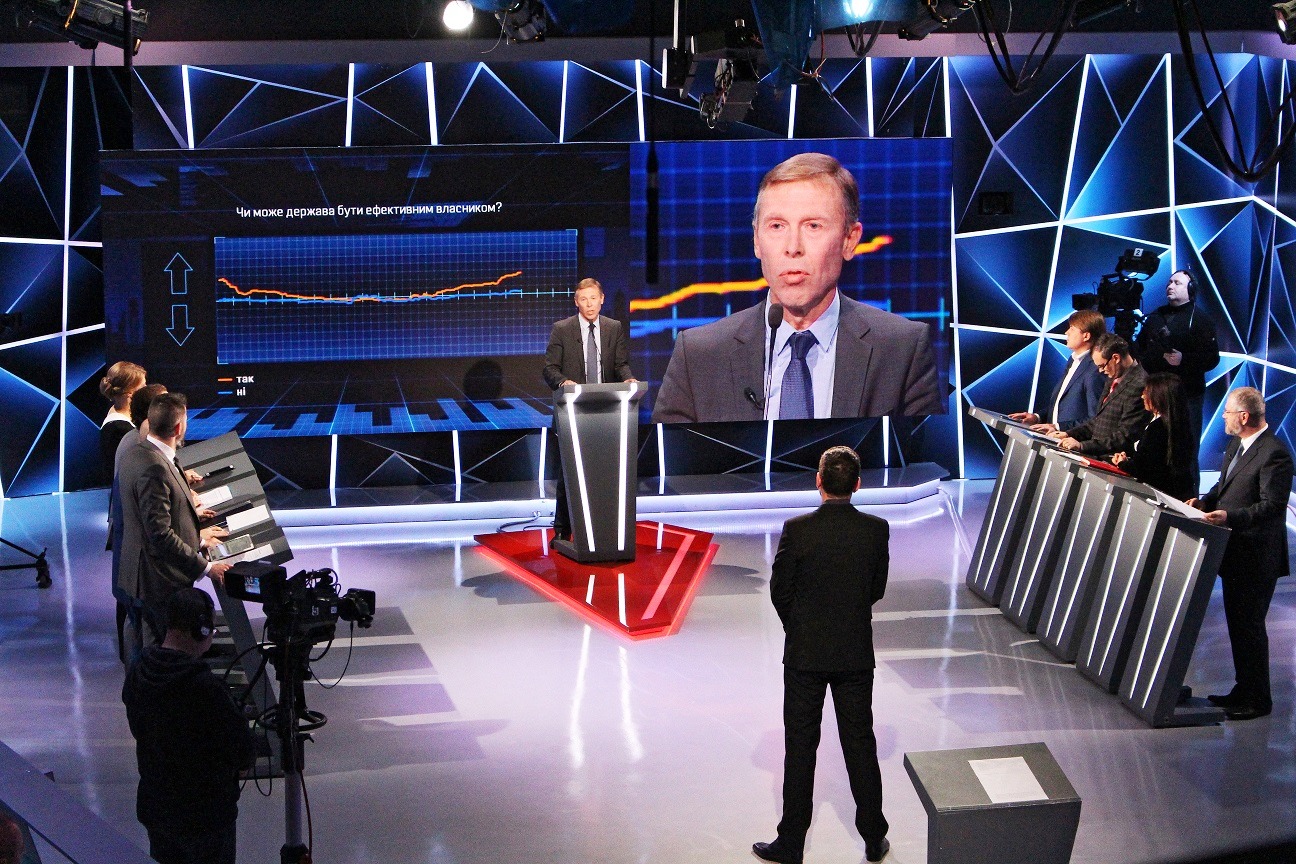 Product Information of the ICTV’s Freedom of Speech talk show:
Freedom of Speech on ICTV is a program with millions of viewers and a broad audience not only in Ukraine, but also far beyond its borders. An intensified interaction is achieved through comprehensive intercommunication of the presenter and the audience, as well as viewers thanks to individual polls and statistics that are constantly displayed on the studio’s large screens. Statistics, as well as reaction to selected subjects are formed by the audience, and in its finished form the television product appears on TV screens fully adapted to the general public.