Did you happen to know many cases of real technological breakthroughs under first in Ukraine banner? Without exaggeration, COSMONOVA|NET story in 2018 is this particular case. Expert of technology solutions, telecommunications and IT, owner of a well-known DC|COSMONOVA data center – IT&T leader announced the following TOP 10 cases and events of the company in the yellow earth dog year.

As part of technical experiment of the National Public Broadcasting Company of Ukraine and COSMONOVA|NET, international 2018 Eurovision Song Contest was successfully broadcast on UA:FIRST TV Channel in HD quality with stereo sound, for the subscribers of digital cable TV operators, OTT, IPTV. That made it possible for a great number of music lovers throughout Ukraine to plunge at ease into the atmosphere of this international event.

(We’d like to point out that currently the company cooperates with more than 200 TV operators, 60 TV channels, both national and international)

Above all, it is a large-scale technological step forward given that prior to this successful project all Eurovision festivals were broadcast in Ukraine in SD mono quality.

It is for the first time in Ukraine that farewell, participation and return of the Paralympic national team of Ukraine were successfully broadcast live in 2018. 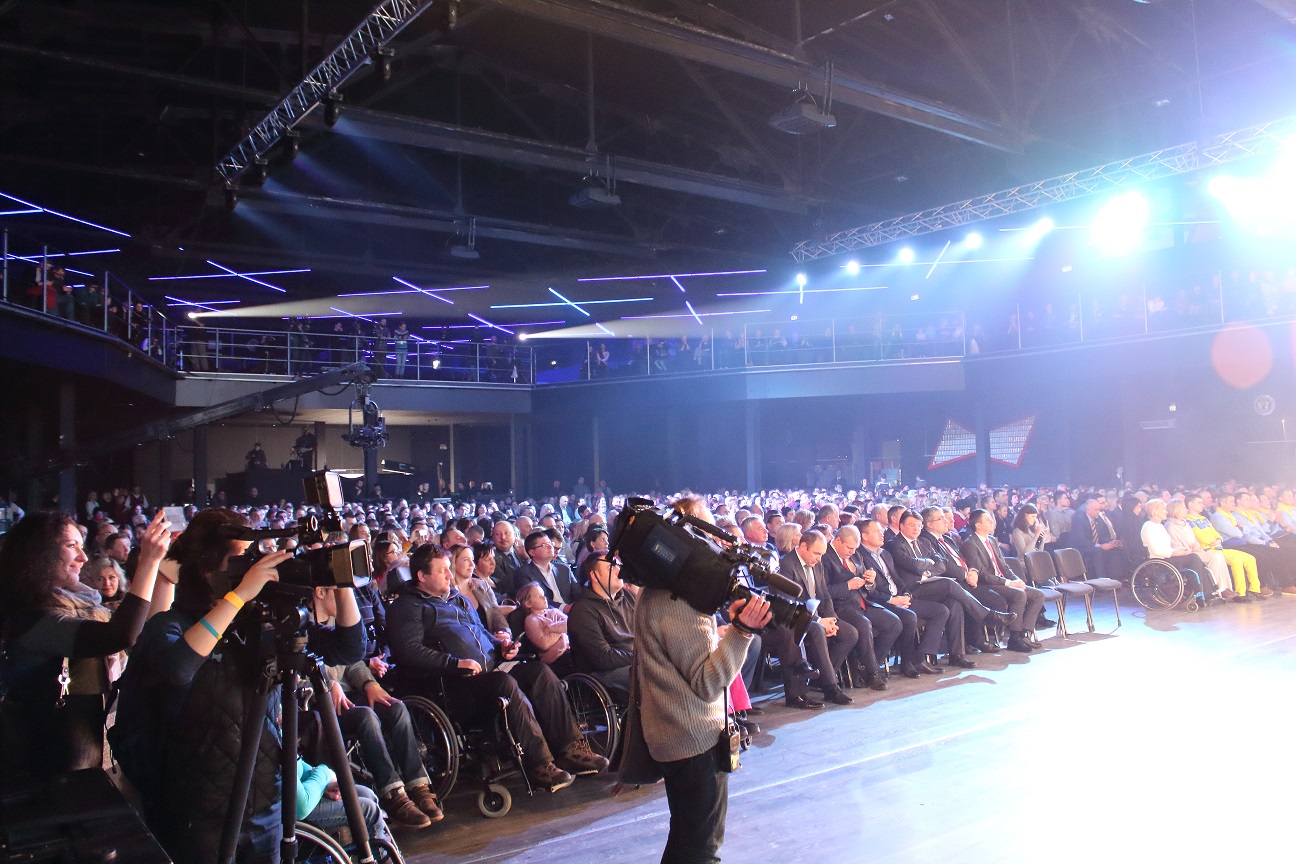 XXII Paralympic Winter Games brought 22 awards to the Ukrainian national team that is the best result as of 2018, from the very outset of participation of our sportsmen in the Paralympic competitions in the distant 1996 in Atlanta.

COSMONOVA|NET got a historic opportunity to organize the first official live broadcast of the Paralympics events in Ukraine and an incomparable experience of new successful implementation of the international large-scale projects.

Primary technical goal to broadcast live games on such web resources as 2014.paralympic.org.ua, invamedia.com quickly turned into the extended key case, with the National Public Broadcasting Company of Ukraine being involved.

Official live broadcast of the 2018 Olympic Winter Games in Pyeongchang.

The National Public Broadcasting Company of Ukraine contacted COSMONOVA|NET with technical assignment to broadcast live Olympic Winter Games in Pyeongchang on the internet.

IT&T leader successfully transcoded four simultaneous HD-SDI signals received from the NPBCU in three types of quality for each stream, with branded logo of the event applied. Experts distributed signal by means of a reliable CDN (Content Delivery Network) owned by COSMONOVA|NET.

The broadcast took place from 9 to 25 of February 2018 at the South Korean Olympic Stadium, Pyeongchang. The audience remembered it as a marvelous sporting event that united for the first time in many years two parts of Korea, which appeared under one flag!

COSMONOVA|NET carried out engineering support for live broadcast of a solemn Ukrainian Armed Forces Parade to commemorate the Independence Day of Ukraine, for UA|TV television platform 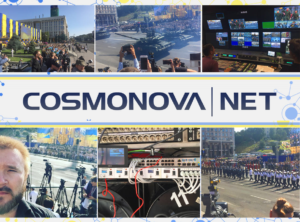 This year COSMONOVA|NET implemented engineering support during broadcast of a solemn Ukrainian Armed Forces Parade to mark the Independence Day, on a mobile TV unit, with live broadcast on the big screens at the very heart of Kyiv, on Khreshchatyk. IT&T leader successfully provided a unique solution of signal delivery from portable cameras of the TV operators and fixed outdoor video cameras to UA|TV multimedia platform.

Having installed COSMONOVA-designed professional equipment at the customer’s premises, the company ensured video signal passage with minimum time delay, that being necessary and helpful for this kind of broadcast, so that every viewer could experience an excellent picture quality of the nationwide event live broadcast in Kyiv. 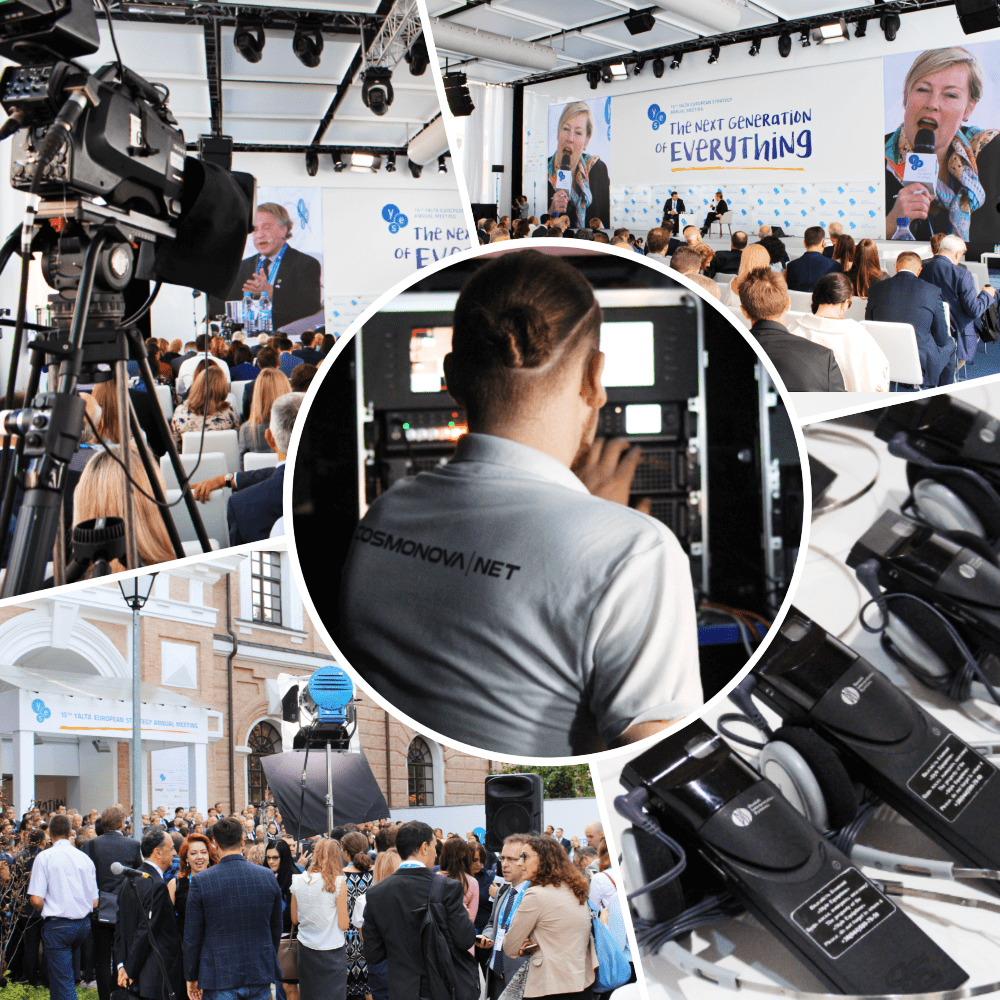 In 2018 organizers of the YES International Global Forum (15th Yalta European Strategy) turned to COSMONOVA|NET with technical assignment to arrange a high-level live broadcast on yes-ukraine.org and a number of customer’s other multimedia platforms.

Generated transport streams of a mobile unit were transmitted to the fail-safe DC|COSMONOVA platform and that provided ultimate users with rapid video content access. At the same time experts at the DC|COSMONOVA premises also adapted video streams to the software and hardware platforms of the Google Android and Apple iOS portable devices.

It is the fifth time that the organizers of 2018 YES, Victor Pinchuk Foundation use engineering capabilities of COSMONOVA|NET that ensure consistent high-quality services owing to the long experience and proprietary technology solutions. 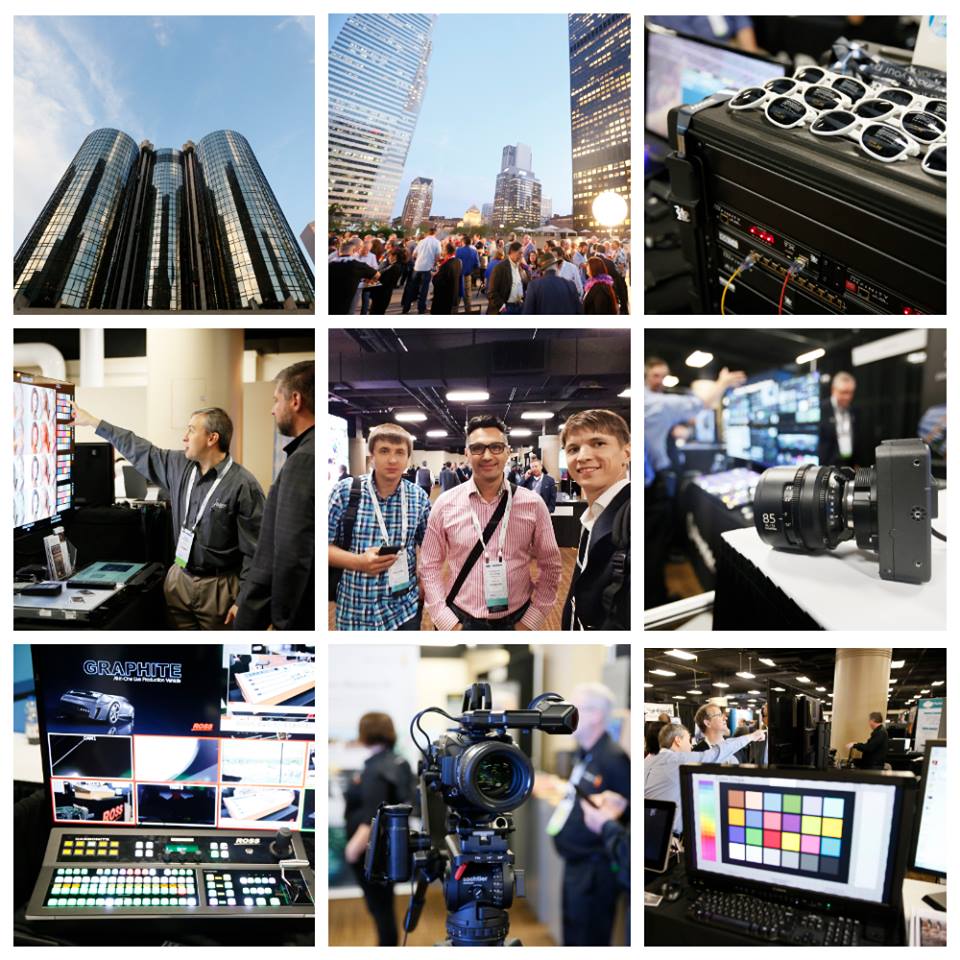 On 22 of October, COSMONOVA|NET visited milestone events of Society of Motion Picture and Television Engineers (SMPTE), which for over a century have been the ancestors for several generations of motion picture and television technology standards.

Society of Motion Picture Engineers was founded in 1916, and in 1950 this international organization of the film industry professionals found a strategic television division due to the headlong development of TV industry. Nowadays it is a global association with more than 7 thousand creative specialists, production engineers, researchers and managers, which are responsible for the world evolution of Motion Pictures.

COSMONOVA|NET analysts note that there are growing trends of global future content based on artificial intelligence and extensive augmented reality tools.

Being a developer of professional solutions for the TV industry, COSMONOVA|NET also orients further research towards AI and IР application in our cloud-based Play Out. In November 2018, engineering department of the company was enlarged by several times, with the aim to hasten improvement of the existing solutions in the media industry.

Participation of COSMONOVA|NET in the IBC European technology forum and exhibition events in Amsterdam.

Leading media players and innovators were creating the future of digital technology by presenting up-to-date products and solutions in the IT environment. Amsterdam RAI Exhibition and Convention Center welcomed the attendees and delegates of the IBC unique informational conference and scientific exhibition that was from 14 to 18 of September in the capital of the Netherlands.

COSMONOVA|NET presented its own in-house developments of the international content platform "Content in One click" designed for an efficient interaction between TV channels and TV operators all over the world.

For the first time in the history of Ukrainian film industry, COSMONOVA|NET IPTV engineers arranged the interactive video conferencing during pre-premiere show of the comedies produced by 1+1 MEDIA and STAR MEDIA TV

STAR MEDIA and 1+1 MEDIA contacted COSMONOVA|NET for an efficient implementation of the teleconference: two-way audio and video communications between two distant sites with the use of television technology and high-speed data transfer channel.

On December 17, 2018, in Kyiv Oskar (Gulliver Shopping Mall) and Cinema Citi (Ocean Plaza Shopping Mall) there was a festive occasion dedicated to the pre-premiere show of at once two comedies of the well-known Ukrainian makers.

At the same time on each of the sites key persons of the event Sergey Pritula and Vladimir Zelenskiy, as well as main participants of this event could have a talk and exchange friendly banter with each other as if they were in one studio.

We’d like to emphasize such marquee events for the company as launching the fourth queue of DC|COSMONOVA Data Center and obtaining a favorable opinion for the examination of CISS of secure internet access node from the State Service of Special Communications and Information Protection of Ukraine. 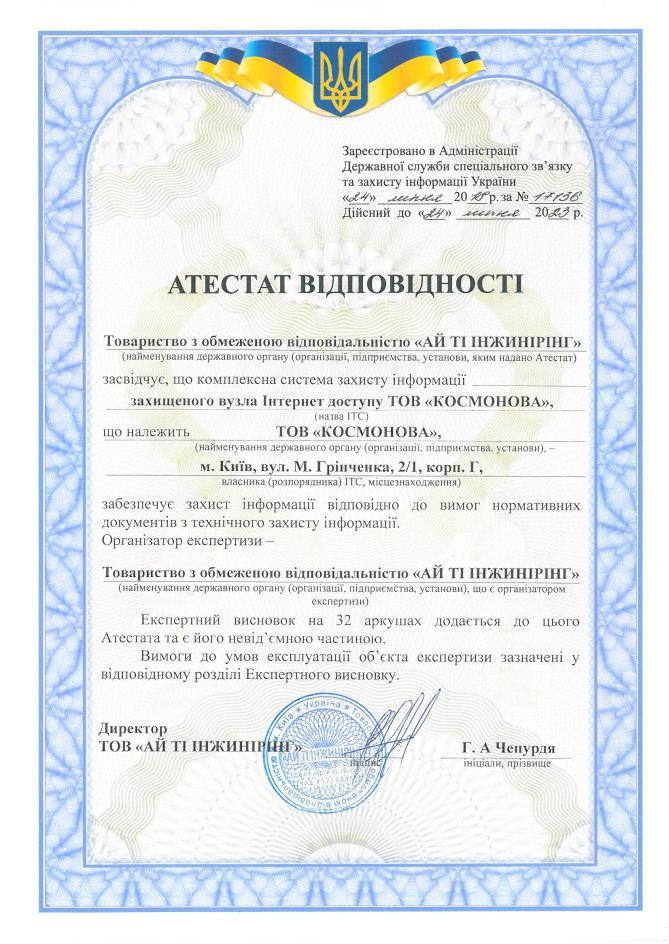 We’d like also to point out that DC|COSMONOVA fourth queue was designed subject to the professional requirements of the most experienced users. In addition, it is open for the services of not only B2B, but also B2G segment: three modules with a capacity of 36 cabinets are ready to take new server hardware “aboard”.

In turn, Compliance Certificate for comprehensive information security system (CISS) of secure internet access node (SIAN) has finally verified possibilities of cooperation between COSMONOVA|NET and Ukrainian public agencies in the form of provision of telecommunication services, according to the alterations to the current legislation of Ukraine.

If the corporate researchers paid attention to this article, we are grateful to them for the time spent reading it. In COSMONOVA|NET we are always open for the dialogue with professionals that will show further interest to our R&D deliverables and engineering capabilities.